Hello everyone. Version 11.2.1 of SCP: Secret Laboratory has just been released! It features a few minor improvements and bug fixes.

It may not be a big update but we still wanted to inform you of some of the changes made.

Conclusion
We hope to be sharing more related to the next major update and its exciting new features. Thank you for your continued support.


Have fun, and see you in the dark.
~ Northwood Studios

SCP-1853, ”Performance Enhancer”
Thanks to the inventory rework introduced in Parabellum, it's now much faster to implement new items into the game. With this update, we're introducing another one: SCP-1853.

The Performance Enhancer is a glass vial of sludgy, green liquid. It can be found inside pedestals throughout the facility. When consumed, it heightens the user's physical abilities and reaction speed, especially in combat. This manifests in the form of an increased ability to handle weapons — including fire rate, reloading speed, and so on. It also boosts sprint speed, but at the cost of increased stamina consumption.

SCP-1853 interacts with other SCP items in different ways. Taking it with SCP-207 will poison the user, while SCP-500 will cancel its effects entirely. Taking it with more of itself will stack the effect but with diminishing returns.

The return of SCP-244, "Ice Fog Jar"
During 2021’s Christmas event, we demoed SCP-244; the Ice Fog Jar. From the get-go we planned to keep it as a permanent addition, but quickly found that it was performing below expectations. As a result, we held off on re-implementing the item to give it more time in the pipeline. Finally, we believe we're ready to bring the jar back into the facility.

As a refresher: SCP-244 is a re-usable environmental hazard that can be picked up and placed by human classes. When placed, it will spew icy fog from its mouth which will fill the area around it. Doors will block the fog from spreading to other rooms. In addition to impeding visibility, SCP-244's fog is also freezing cold. This will impart negative effects to any class that passes through it.

Some highlights of what we've changed from the Christmas version include:


We're hopeful that this version of SCP-244 will be significantly more powerful than its previous iteration, and that it'll affect rounds in a more meaningful way.

Win conditions revamp
One part of SCP: Secret Laboratory that has remained largely unchanged is the win conditions — how the game determined which team was the winner at the end of a round. In addition to being unclear, some reasons were silly. It wasn’t always obvious why a team was determined as a winner. As part of 11.2, we've completely overhauled these conditions.

Up until now, the win conditions have been as follows:


These aren't great for a few reasons, but the biggest problem is that it didn't account for how many of each civilian class escaped. It only accounted for if any civilians escaped. This meant that even if all scientists escaped and only one Class-D, the Class-D team would still win. This is, as long as the NTF weren't the last team standing. These conditions produced a lot of strange interactions. 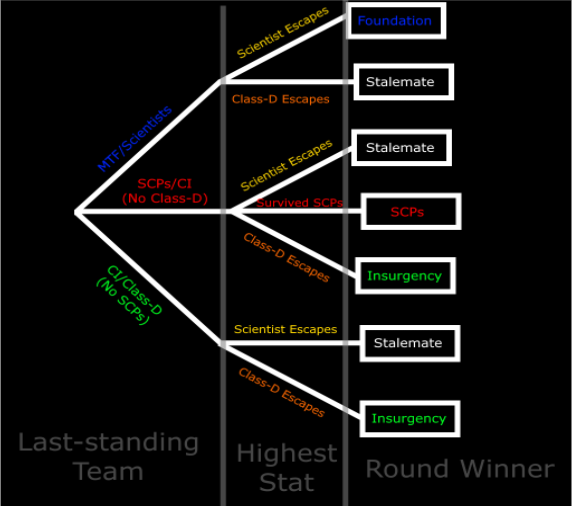 We decided to focus on each team's individual performance instead of looking at certain values in a vacuum. At the end of a round, we compare the following values to determine how each team did:

Civilian escapes is the main influencer of which team is determined as the victor. For SCPs, we look at how many of them are still alive at the end of the round, as this is generally a good indicator of how successful they were in wiping out other teams.

Several other balance changes went into this revamp. For instance, disarmed civilians that escape no longer count as an escapee for any faction. They'll still respawn as a member of the opposing team but their escape won’t contribute towards win conditions. This allows civilians to be escorted out by hostile forces, but now you have a choice: save your own hide, or take the risk to try and bring your team closer to victory?

If the flowchart isn't clear, here's how the game determines the winning team now:


Going forward, we hope that this will result in more sensible victories for all three factions.

Conclusion
Although version 11.2 features plenty of content, it's mainly a maintenance update. We aim for this to be the final update in the Parabellum series; barring any hotfixes we need to release for outstanding balance or technical issues, of course. Work is already underway on the foundational work for our next content patch (as we explained in our latest devlog). We're excited to show you what comes next, when the time is right.

See you in the dark.

We'll also have a Q&A and presentation stream on out Twitch channel at 8PM UTC.

Version 11.1.4 has just been released. It contains a few bugfixes and is compatible with the previous version (11.1.3).

Today we're releasing version 11.1.3 of SCP: Secret Laboratory. This update contains a large number of fixes and adjustments, as well as balance changes to some SCPs and a detailed plan for future modding support.

Balance
Like any asymmetric game, Secret Laboratory is constantly evolving. We try to keep an eye on how rounds are influenced by the tuning of each aspect of the game. In this patch, we're making a handful of stat adjustments to three classes.

Hi! In past patches, we've included insights from our Development team to accompany balance changes we've made, in an effort to explain our rationale. We'll be trying this again by including our design clarification after each section of changes. Let us know what you think!

Players killed by SCP-049 will be locked into their death camera for as long as they are able to be revived (currently 10 seconds).

Players that have been killed by SCP-049 are able to spectate other players during the revival process. This is often used to gather additional information about the round; giving these players an advantage when they are revived as instances of SCP-049-2.

We're trying a new limitation where these players are no longer able to see other players' positions while they're still able to be revived, only being able to switch perspectives once they can no longer be resurrected. This might change depending on how the feature plays out.

SCP-106 is currently highly resistant to damage from guns but can be easily shredded by objects such as frag grenades and the MicroHID.

We have redistributed some of the Old Man's survivability. The goal was to provide leniency for SCP-106 without changing how much of a tank he is. SCP-106 will find it harder to face wave after wave of gunfire, but will have an easier time facing other hazards.

Hume Shield no longer has armour, meaning that firearms will do full damage, no matter the weapon's penetration.
Hume Shield out-of-combat recharge rate increased from 15/s to 20/s.
Health armour efficacy increased from 60 to 80.

We’re moving a lot of SCP-173's survivability from its Hume Shield to its health pool. This is similar to the problem initially presented by SCP-096, where classes had difficulty doing any chip damage during a confrontation, even if they played well. As a result, in these confrontations, their ammunition and lives were ultimately wasted.

We believe that this change will allow Hume Shield to remain strong against individual attackers and occasional damage, while also preventing it from being largely responsible for 173’s ablility to survive the lategame. Increasing the armour efficacy on its health should mitigate the loss of armour on its shield.

Upcoming changes for heavily-modded servers
In Parabellum, we introduced the ability for Remote Admin and plugins to spawn in simple objects, such as cubes, spheres, cylinders, and so on. These primitive objects can be modified dynamically via scripts. This can change their size, colour, appearance, and other aspects, making them extremely versatile.

These objects saw rapid growth amongst the modding community, and some really creative things have come out of their addition! It has, however, presented some problems — primarily, there's not an easy way for a player to distinguish between servers that make heavy use of these objects to change the game experience versus ones that don't.

Currently, the Modded tag is binary; either it exists or it doesn't. This tag is vague, as it makes no differentiation between servers that use mods for administration and those that alter gameplay.

In the near future, we'll be taking steps to distinguish servers that heavily utilize these objects and those that don’t. After a lot of internal debate and discussion, we're currently planning on taking the following steps:

We'll be implementing a simple way for servers to distinguish whether they’re using mods to heavily modify the way a round plays out. Currently, we're calling this "heavily modded" and will be using that term for the remainder of this changelog.
Heavily modded servers will have a unique identifier on the server browser, similar to the Official servers. These servers will only appear in the specified category, and not on the Internet category of the server browser. This category will likely have a popup to serve as a disclaimer about the community-generated nature of the experience that these servers provide. There are many ways to do this. A check box to show, or hide, heavily modded servers is an example of what we might consider.
We will amend the Verified Server Rules to reflect that this tag is mandatory for servers that make use of mods that dramatically alter the gameplay experience. This includes, but is not limited to, primitive objects.
Servers that do not use the heavily-modded tag will have hardcoded restrictions on their use of primitive objects.. We're still figuring out how we want to do this, but some ideas we've had thrown around include making them RA-only (as opposed to allowing plugins to spawn them in), imposing limits on the amount that can be spawned at once, or both. Heavily modded servers will have no restrictions on the use of primitives.

None of these solutions have been confirmed and are subject to change. They might see significant alterations depending on continued internal discussion, or they might be implemented as-is.

The main reason for these changes is that players don’t have a way to distinguish between what is, and isn’t, a part of the normal game.

These changes will create a clear division between what is a heavily modded server and what does not. Mod development is a big part of why Secret Laboratory continues to thrive, and we want to support that, especially because there is a genuine audience for variants of the game that differ very heavily from what the vanilla experience offers. Not only does the differentiation stop further confusion, but it also allows players that want to try these experiences to find them much more quickly.

This is part of an ongoing effort to make modding more approachable. We would still like to do an official API for plugins, tweaks, and other mods, and we've been toying around with different ideas as to how we might approach that in order to let players see the mods a server is running from the browser. For now, we hope that this is a good step forward towards making this aspect of the game clearer and more approachable to everyone who plays it.

Thank you for supporting us, and stay safe!